Shopping Cart
Your Cart is Empty
Quantity:
Subtotal
Taxes
Shipping
Total
There was an error with PayPalClick here to try again

Thank you for your business!You should be receiving an order confirmation from Paypal shortly.Exit Shopping Cart

« Back to Latest News

My beautiful Chocolate Labrador "Casper Bear" had his second knee surgery last week on Tuesday 4th October (luxating patella). The operation was a lot more problematic than the last knee but Casper is doing well. He will be having his staples removed in a few days and then we will be preparing for his hip replacement in the new Year. 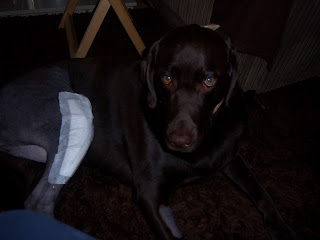 This photo was taken 5th October when Casper returned home after a night at the veterinary hospital. He was in some pain and not feeling too happy, hence the sad face, BUT, he is well on the mend now and back to his happy old self and getting into allsorts of mischief as usual. What would we do without him! He is such a preciouse boy!